ACTIVITIES
Visits
Check out colleges, teams and training facilities
Showcases
Drills and challenges to prove your abilities
Tryouts
Online tryouts accessible from anywhere in the world
Training
Train virtually with the best in the industry
Evaluations
Have your highlights professionally reviewed
VIDEOS
Suggested
Personalized recommendations highlighting top submissions
Streams
Produced podcasts with elite coaches, trainers and athletes
ARTICLES
Latest Articles
Find out what’s trending for Athletes, Coaches, and Parents
Athlete Spotlight
See how athletes are maximizing their opportunities on GMTM
Career Advice
Read expert articles teaching you how to step up to the next level
For the Parents
Learn how you can help an athlete succeed on and off the field
Event Coverage
Get the latest news on GMTM hosted events
TOOLS
Profile
A custom web profile to support your entire athletic career
Edits
Social media images to promote yourself and build your brand
Analytics
Get the latest insights on your GMTM participation
SEARCH
Athlete Profiles
Search thousands of profiles and find your next star
Film Database
Search thousands of videos from top athletes & recruits
SIGN IN
SIGN UP
Notifications

College Football: One Improvement for Every Heisman Favorite QB in 2021 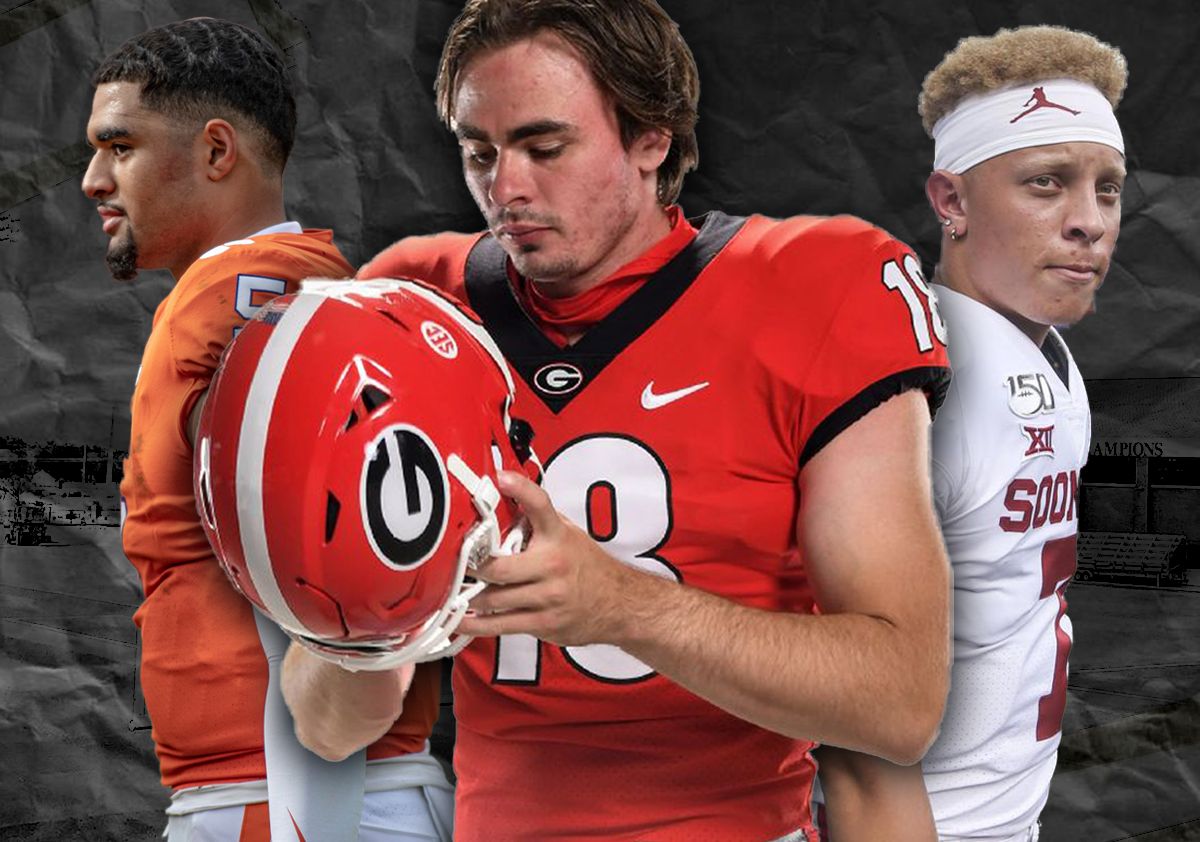 The regular season may be several months away, but college football is in full swing with spring games kicking off across the country. Among the many things fans will be watching is the continued progression of the nation's top quarterbacks.

In a post-Trevor Lawrence world, several young gunslingers will be looking to become the nation's top passer. To do so, they'll have to bring their game to another level in 2021, while leading their respective teams to even greater heights. For these Heisman favorites, improving certain facets of their game could pay huge dividends this coming season.

Any critique of Rattler is going to feel like nitpicking. The star Oklahoma signal caller had a fantastic freshman year, passing for over 3,000 years and 28 touchdowns. His seven interceptions don't seem like a large amount, but five of them occurred during a span of three games, including a three-pick nightmare against Kansas State.

5Etfw">@TarHeelFootball Head Mack Brown told us he fully expects Sam Howell to be in the mix.....

"I just feel like he's already in a position in his mind where if that comes up, he wants to go to the next level"

One way for Howell to take his game to another level is to improve his mobility in the pocket, something even he has admitted to. Howell has averaged over three sacks per game during his two seasons in college. While much of the blame can be directed towards mediocre offensive line play, their 220 pound quarterback can't continue to stand still and take big hits.

A stellar athlete, the concern is not necessarily that Howell can't scramble for a few yards when nobody is open down field. Evading pressure includes simple acts such as throwing the ball away or dumping it off to a safety blanket, even if the play only results in a yard or two.

Subtle shifts away from defenders in the pocket, something that comes with experience and awareness, should only make UNC's Air Raid offense deadlier, as Howell will be able to buy more time for his targets to gain separation. With a potential future in the NFL ahead of him, Howell needs to make sure that he isn't punishing both his team and his body by holding onto the ball for too long.

The pass rush is all about angles. And few defensive players have seen it from as many angles as former NFL and current CFL player Craig Roh. An Arizona native who was a two-time First Team...

After nearly ten years away from the NFL, it appeared that just about everyone inside the league had forgotten about Tim Tebow. Everyone except his former college coach. Last weekend, the...

Think you can hammer out more reps than anybody on your team? How 'bout your entire state? The Cleveland Browns launched their Virtual High School Showcase on...

Now that the 2021 NFL Draft is in the books, much of the focus will be on how the higher-profile players in this rookie class fit in on their new squads. Collegiate superstars like Trevor Lawrence,...

With over 3o Virtual Events happening live on GMTM right now, athletes from all over the world are leveraging their talent and finding opportunities easier than ever. From volleyball to bobsledding...