Joseph Townsend (’21) is a Nightmare on the Edge | GMTM

Joseph Townsend (’21) is a Nightmare on the Edge 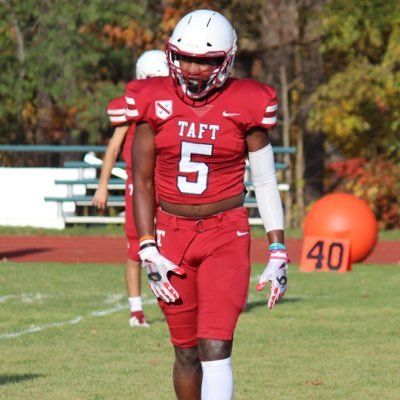 A New Jersey Native, Joseph Townsend is an elite EDGE prospect in the class of 2021. He shows outstanding athletic ability paired with great technique and a sky-high ceiling. In August, GMTM’s Joey Grant and former USC quarterback Max Browne evaluated his tape live on Twitch. Here’s what they thought:

Immediately, Joseph’s athleticism popped off the screen. On this play, he dropped into coverage and made an outstanding one-handed interception in the Red Zone. Both Joey and Max were extremely impressed with the raw athleticism and hands that it showed. This is a crucial aspect to highlight for Joseph, as it shows that he is more than comfortable dropping into coverage when asked.

His athleticism continued to flash throughout the course of the tape, as his get-off was apparent. Joey praised his ability in that space and highlighted it as an important trait for Townsend to show off. Repeatedly, he was off the ball and in the O-Lineman’s face before they even had a chance to set their block. Joey pointed out his outstanding pre-snap stance, as he maintains a flat back and gets low, allowing him to generate outstanding power and explode off the ball.

Opposing offensive line coaches clearly knew the threat he posed, as he routinely found himself getting double-teamed or chipped by the running back coming out of the backfield. He had no problem beating these double teams, however, as illustrated in the play above. He quickly tossed the tackle aside, and then was able to euro-step the guard coming over to help and forced the QB to leave the pocket and throw the ball away. He doesn’t get credit for a sack here, but his pressure completely disrupted the play.

Townsend’s pressure forcing QB’s into bad decisions was another common theme on his tape. On this play, he was able to put pressure on the quarterback and cause him to throw up an ill-advised pass that again resulted in a Red Zone interception. While a lot of his game is enhanced by his athleticism, he does not rely on that alone to get to the passer. He shows great potential as a technician at the EDGE position, as highlighted on this play. He quickly swatted away the hands of the offensive tackle, and then was able to dip around the edge and make a beeline for the quarterback. This is a high-level pass rushing rep, regardless of age or level of competition.

In addition to his pass rushing abilities, he showed signs of being a capable defender against the run as well as making an impact on Special Teams. Near the end of his tape, he shows multiple plays where he blows through the middle of the line to block a kick. He flashes the ability to defend the run well on this play, where he easily beats his man and is able to blow up a WR reverse in the backfield for a loss.

• Elite get-off and athleticism allows him to beat offensive linemen off the ball
• Shows flashes of high-level technician ability with hand-fighting and counters
• Comfortable in coverage, stout against the run, and makes an impact on Special Teams

Joseph Townsend’s game is reminiscent to that of Von Miller. He possesses an elite get-off and burst off the EDGE, and can get to the quarterback in a hurry. Standing at 6’2” with at 78 inch wingspan, he has room to grow and the frame to add muscle when he gets in a college weight room. Currently with no offers, he will almost certainly prove to be a big-time player with whoever is signs him this season.

Check out more player evaluations from Max and Joey on YouTube.