Every College Tennis Rule That Is Different Than The Pros | GMTM

Every College Tennis Rule That Is Different Than The Pros 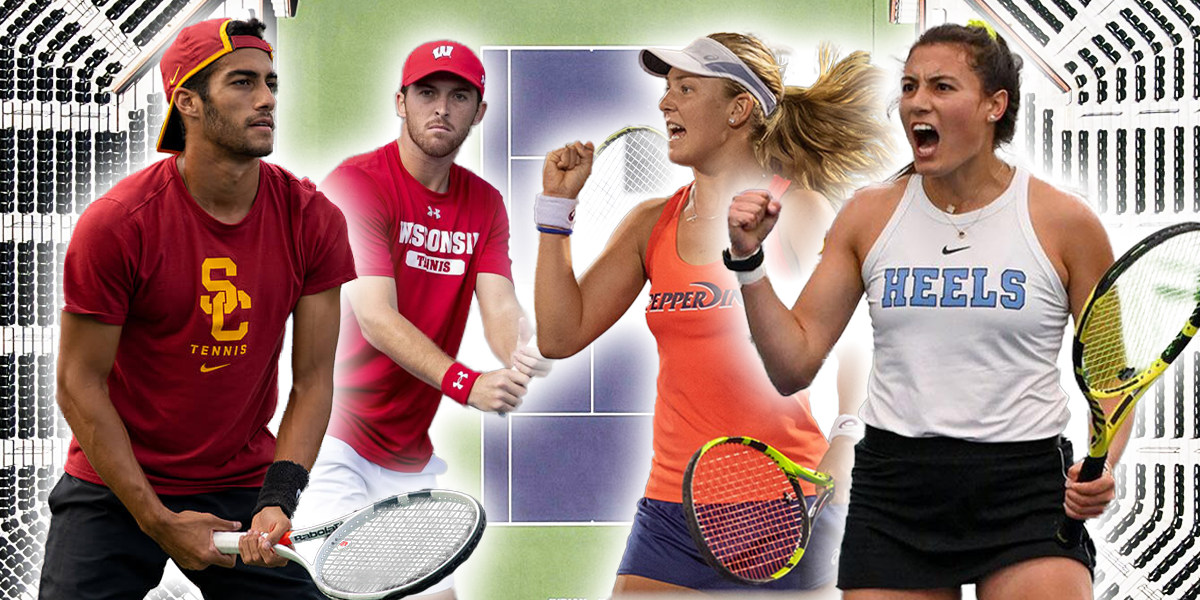 College tennis is a unique and great experience for both athletes as well as fans. For those high school athletes looking to advance their tennis career, there are over 900 tennis programs to investigate through Divisions I, II, and III.

Being a part of one of these college tennis teams may be one of the most fun experiences as a student. The tennis matches are fun as a spectator too due to the high level of competition, the passion shown from athletes who dedicate their lives to get this opportunity, and the faster-paced match play.

With that being said, the NCAA has modified the tennis rules over time to reduce the length that a typical match takes. These custom rules have made college tennis unlike any other level of competition, especially professional tennis. Here is the most notable information on the differences of college tennis that will help understand how college matches are played.

No Warmup with Opposing Team Allowed

At almost all tennis levels, warming up with the opponent before a match is the standard. It provides each player the opportunity to get in a rhythm before the match and gain first observations of the opponent’s playing style.

In college, players go right into the coin toss and walk to their side to immediately begin the first point. Although players can warm up with teammates prior to the match, it can be difficult for both teams to adjust to the flow of the game. The away team may struggle due to the high amounts of traveling and the home team may find it difficult to get a rhythm since they are likely just arriving from the classroom.

Due to the no warmup rule, it is critical for college tennis teams to find their rhythm quickly to take control of the match.

The doubles teams are the first to face off in a single-set match.  In college tennis, there is only one point awarded (called the doubles point) to the team that wins 2 out of the 3 doubles matches.

The set played is won by the team who gets to 6 games first. Additionally, teams are required to win by 2. This means that if the score is tied 5-5, the set goes until a team wins 7 games. If the set reaches 6-6, the doubles teams will face off in a tiebreaker to 7 points.

First, singles matches are decided when a player wins 2 out of 3 sets, with the 3rd set potentially being a super tiebreaker (10-point tiebreaker) if time is limited.

Secondly, if a player wins their singles match, they are rewarded one point toward the team’s overall score. This indicates that college singles are weighed more heavily than college doubles, since each singles match is worth one point.

Matches are Played with No-Ads (No Deuce Points)

To follow NCAA’s theme of attempting to reduce the match durations, college tennis plays each game with no-ads. In other words, when a game is tied 40-40, the team returning the serve can chose which side they want to return from (ad or deuce). The winner of this point wins the game, and the set continues.

Matches are Played with No-Lets

Usually, when a serve lands in-play but hits the net prior to contact, the serve is called a let and is redone. College tennis eliminated this rule, making a let playable.

This turns a tennis match on its head since a serve that would usually not count can throw the opposing teams completely off-guard. Players typically stand on the base line for serves so balls that hit the net are extremely difficult to reach.

Cheering is Allowed During Points

Cheering during points has always been frowned upon in the tennis community. If there was a rule book about tennis fan etiquette, this would be rule #1. However, college tennis encourages fan cheering as long as it stays friendly.

College Players Call Their Own Lines

While almost all college sports have officiating available throughout the season, college tennis players are required to be their own refs (until the playoffs). As many could guess, college students may not have the most neutral judgement in mind which could spark controversy during matches.

The First College to Win 4 Points Wins the Match

Whether it’s by winning 1 doubles point and 3 singles matches or winning 4 singles matches, the match is decided when a team reaches that 4-point threshold. Coaches can decide to stop the match once that threshold is reached or allow the remaining players to finish out their matches so they can continue to gain more experience for when it comes to playoff time.

Now that you understand why college tennis is such as unique experience, check out which colleges have programs in your local area.

Whether it’s a Division I, I, or III program, you are bound to find competitive and engaging tennis matches that keep you on the edge of your seat.