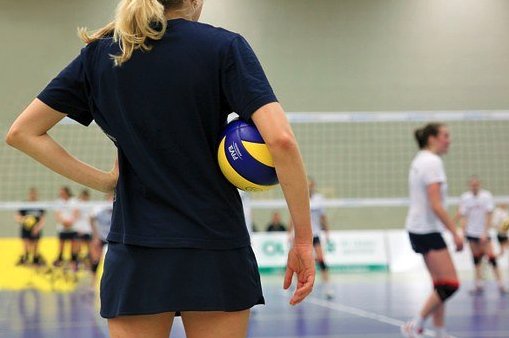 No matter how talented or hardworking you are as an athlete, there are ways to boost your recruitment in order to get noticed by colleges, universities, and recruiters that you're looking to play volleyball for. Volleyball recruiting is incredibly competitive, but there are many different levels to continue on to play after high school and if you're seriously interested in playing, you can do it! Here are some tips that will help boost your recruitment:

Having film for recruiters and coaches to watch is important. Instead of creating a highlight video of simply all your best kills, blocks, serves, or passes in a micro-edited film, it is also best to show some longer clips as well. Certainly include those great kills, blocks, passes, wherever your strength is, show it!

Along with your highlights, be sure to include clips and film that also show how you overcome adversity during a match. Pick a few other excerpts of game film that show your body language, how you interact with your teammates, what you do when you fail, and ultimately, how you compete on the floor during AND between points.

A lot of coaches will be impressed with your talent, but they're not just looking for talent. They're looking for someone who will work hard, have a good attitude, and fit well with their team.

Is it your goal to play for a nationally ranked team? Or maybe attend your dream school as a student-athlete? If so, before you sink your teeth too deeply into the idea, look into the roster.

This is so important! Researching the roster at a college can show you how deep your position is on the team.

If you're a setter and there's only two other setters, and both are seniors, that sounds like you have a great chance of playing for that team as an underclassman. But, on the contrary, if the team you're looking at already have a setter in each class and you know they run a 5-1, then you might have to decide if playing time is more important than attending your dream school.

Winning your spot on the floor isn't impossible, but with a deep roster on a college team, you'll certainly be tested every practice. Being realistic about your place on the team is an important aspect to consider as you look for a place to play college volleyball.

You should also find out how big the recruiting class is for your upcoming freshmen season and who is included in that group as well. While a team may have open spots with a lot of graduating seniors, those positions could be filled quickly with other incoming freshmen who want to compete for that spot.

When you're in between seasons or have time on your hands, it's always a great idea to keep watch on the players that you wish to play like. Watch videos on Youtube, watch college volleyball games, and attend volleyball games when you can. By watching you learn and your volleyball IQ will get greater. You might understand that elbow-pop dig off a block after watching it, or the form of great blockers that you haven't seen before, or the amazing serve you will one day imitate. Immersing yourself into the realm of volleyball will enable you to have more "smarts" with the way the game is played.

Because both high school and college volleyball are during the fall season (usually, when not in a pandemic) coaches typically don't have a lot of time to do recruiting, and so usually do more recruiting doing spring JO season. They will attend, or send assistant coaches to attend, tournaments where there are numerous competitive teams playing. And playing during both seasons will definitely give you an advantage and increase in your volleyball level. The more volleyball you play– the better!

When transitioning from playing high school volleyball to college, the biggest difference athletes claim that is different than high school is the attention to weight lifting and working out.

Every college sports team has a weight lifting program that is expected to follow and you want to give the impression to the recruiters that you are active, healthy, and willing to work hard in the gym.

These steps can help boost your recruitment to not only get noticed by a recruiter or coach, but to have them think yes, they want you playing for their team!

Rebekah Morris is a contributing volleyball writer for GMTM. She played college volleyball for Minnesota-Morris and now coaches at the high school level, helping to empower the next generation of volleyball athletes.